Caliente Community Chorus is a non-auditioned, volunteer ensemble that was created in 2006 to make and share music with the people of the Four Corners and beyond in order to form community around us and within us.

Caliente Community Chorus is a 501(c)(3) charitable, non-profit organization. Our goal is to make a positive impact in the community through musical performances. Following that objective, Caliente instituted an organizational scholarship with a primary focus on
providing monetary awards to students either entering or attending post-secondary
educational programs.

Caliente has collaborated with other community organizations such as local college and
high school choral ensembles, other regional community choirs, brass and orchestral
ensembles, and the San Juan Symphony. Caliente performs works that range in variety from opera choruses to cathedral classics, from world folk to jazz standards, as well as
traditional Broadway and cinema greats. 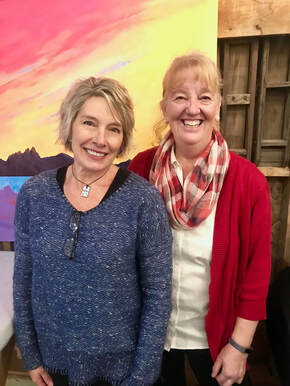 Virginia Nickels and Robyn Woodard
Meet Our Director
Virginia Nickels-Hircock is a native of Harrison, Arkansas where she was an active choir, band and piano student.  She attended the University of Arkansas at Fayetteville where she received Bachelor Degrees in Music and Music Education. Ms. Nickels received a Master of Music Degree in Choral Conducting and Music Education from Westminster College.
Virginia was employed with the FMS District from 1990-2019, and finished her career there at Piedra Vista High School. She is currently teaching music classes at San Juan College.
Virginia loves the Farmington area. She is active in community musical endeavors. She has performed with the San Juan College Masterworks program, served as Choir Master for the Showcase Adult Choir and was the vocal director for San Juan College’s production of “Sweeney Todd” and “Little Shop of Horrors”, and Sandstone’s production of “Fiddler on the Roof”.  Ms. Nickels is the co-founder and conductor of Caliente Community Chorus.
Ms. Nickels-Hircock was honored in 2016 as the Farmington Municipal Schools Teacher of the Year, and in 2011 as the NMMEA Music Educator of the Year.  Virginia has been nominated for the Disney Outstanding Teacher Award, and Who’s Who Among American Teachers. She received the Outstanding Music Educator Award from the World of Music Festival in 2002 and the Foundation for Excellence Red Apple Award in 2008, 2010, and 2012. ​
Meet Our Accompanist
​Robyn Ferre Woodard has lived in Farmington for most of her life. Robyn fell in love with the piano at the age of eight and realized her passion for music would drive her to try anything musical.   Robyn played flute in junior high school band, and began accompanying for Mr. Angelo Turano’s High School Choir.  Robyn was active as accompanist for the choirs, as well as playing in marching, symphonic, and jazz bands.
Robyn attended BYU on a performance scholarship and traveled with the Young Ambassadors.  Robyn’s life then took a turn towards family.  She taught her six children the joys of sharing and performing music. During these years she created a band that played for many functions in town.  Her “Breezin’ Band” soon incorporated her children playing different instruments and singing together.
Robyn has performed vocally not only with her family but with Showcase Choir and in the SJC Masterworks Concerts. Her love for the youth has kept her in the school system where she has worked with and accompanied most of the choirs in elementary, middle, high school and college throughout the area.
Ms. Woodard has worked with many talented directors but has found her niche working with Ms. Nickels.  Together Robyn and Virginia have created a choral ensemble for non-auditioned adult singers, “Caliente Community Chorus.”